We are strictly forbidden for taking photos of any person anytime at the site. on FB i have put a few shots around the site early in the morning,  but the children making crafts or dancing, or playing will just have to be 1000+ words. 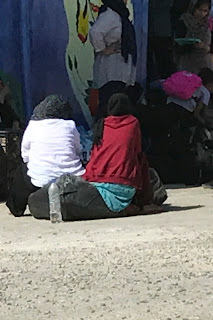 They are in general happy as children can be who have parents or parent with them and enough to eat. Shockingly it does not require video games for happiness! They don't mind lack of supervision or the heat or nothing but rocks to throw. They play, they sometimes punch, they run. If a bike shows up they ride and do not want to share. 11 year old girls form cliques, although there is no ostracism for unfashionable dressing since they have only one outfit each to wear every day.

They also fetch and carry, watch siblings, sweep, wash clothes, and sleep in the same 8x12 room with their whole family. The bathroom is a porta pot. The kitchen and washing area are not conveniently located near anything. They have been taken from the language and life they know with only the promise of something better.

The volunteer placement has been harder than most to imagine the future of these children. Next week or next month or never they may get clearance to Europe. There they may be safe but never accepted. The contrast of old customs with new life will be more stark. Or they may be sent back to Afghanistan and find a that even after the struggles at the Greek site, "home" is far harder than being here.

For us who come with the fore knowledge of  departure, the snap shot of their lives can be framed with hope and prayer  but never certainty.
Posted by Robin at 10:20 PM

Robin
Retirement is not sitting still - it is only doing what you love! I divide my time between Nana-dom for 5 Grandblessings, pastoral work St Mark's Episcopal, and writing stuff I hope gets published.